DID you know that Google has been recording you without your knowledge?

The technology giant has effectively turned millions of its users’ smartphones into listening devices that can capture intimate conversations – even when they aren’t in the room. 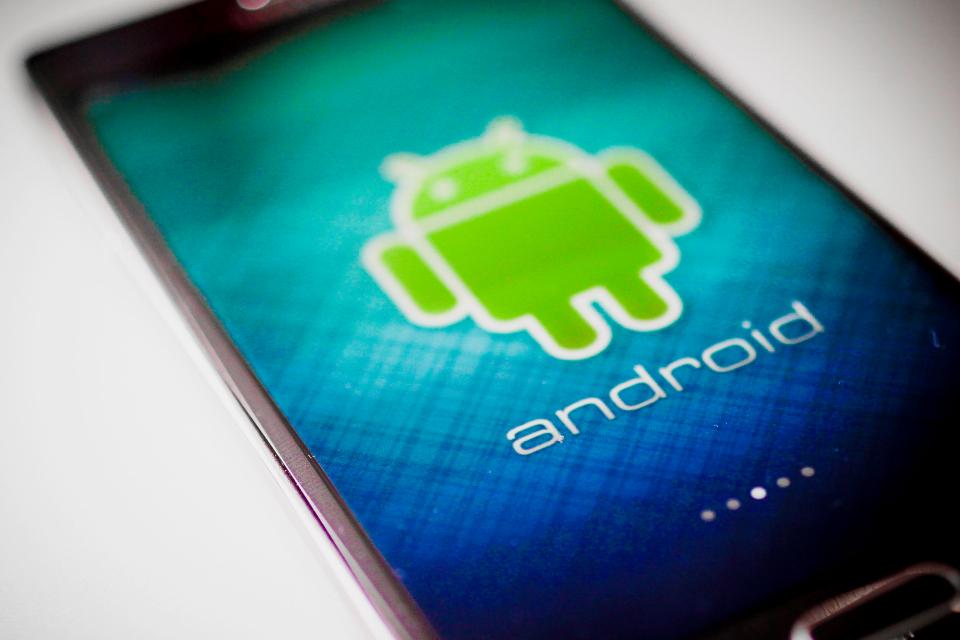 If you run Android software on your smartphone, Google may have been recording you every day – without you knowing

If you own an Android phone, it’s likely that you’ve used Google’s Assistant, which is similar to Apple’s Siri.Google says it only turns on and begins recording when you utter the words “OK Google”.But a Sun investigation has found that the virtual assistant is a little hard of hearing.In some cases, just saying “OK” in conversation prompted it to switch on your phone and record around 20 seconds of audio.It regularly switches on the microphone as you go about your day-to-day activities, none the wiser. 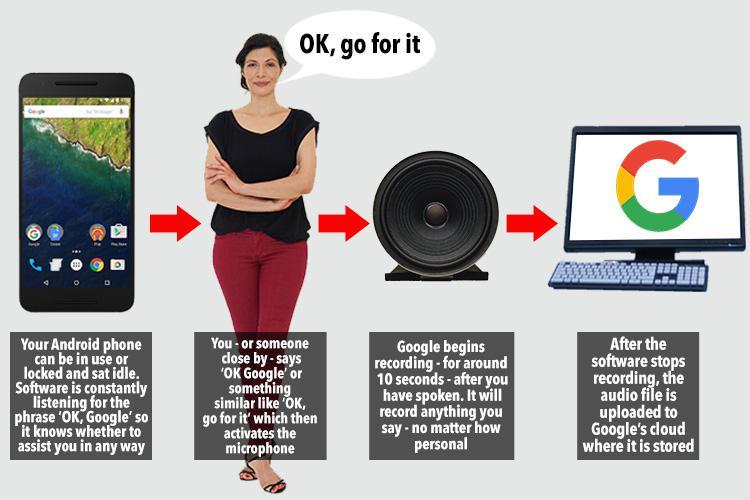 Once Google is done recording, it uploads the audio files to its computer servers – often dubbed “the cloud”.These files are accessible from absolutely anywhere in the world – as long as you have an internet connection.That means any device that is signed into your personal Gmail or Google account can access the library of your deepest, darkest secrets.So if you’re on a laptop right now and signed into Gmail – you could have a listen. 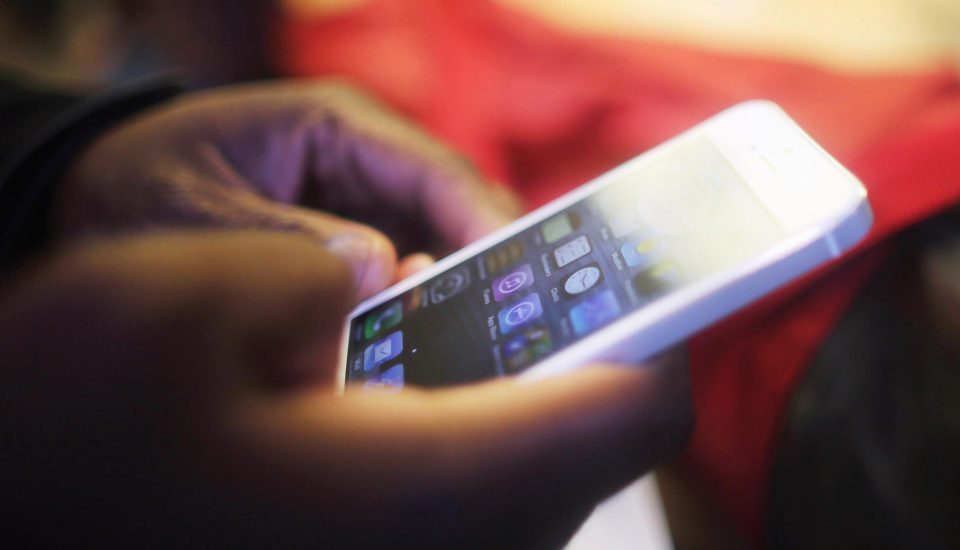 Recordings last around 10-20 seconds on average, and a text version of the conversation is saved.

The Silicon Valley giant states on its terms and conditions that it keeps these recordings for “improving speech recognition against all Google products that use your voice”.

After the Sun Online presented examples of the voice recognition flaws to Google, a spokesman said: “We only process voice searches after the phone believes the hot word ‘OK Google’ is detected. Audio snippets are used by Google to improve the quality of speech recognition across Search.”

Mundane voice recordings from the general public will help its artificial intelligence that runs Google Home, by teaching it how humans naturally communicate.

In simple terms: it’s a free language class for its software.

How to find out exactly what Google knows about you

But Google is, first and foremost, an advertising company and its largest product is a targeted advert service, which it sells to the biggest brands in the world.Billions of annual web searches, location and email data allow it to target the population with specialised marketing – and there is no reason why it couldn’t do the same with your voice data, too.So, now for the important question: how can I listen to the sound files Google has from my life?

How can I listen back to the audio Google has recorded from my phone?

It’s pretty easy.Unlike Apple, who does not publicise any of the voice data it stores through Siri, Google is pretty transparent – giving you full access to your audio.First, you’ll need to be signed into your Gmail or Google account.Once you’ve done that, type “history.google.com/history” into your web browser.You’ll be taken to a hub which contains your entire digital footprint, so be careful, it could make for some grim reading. 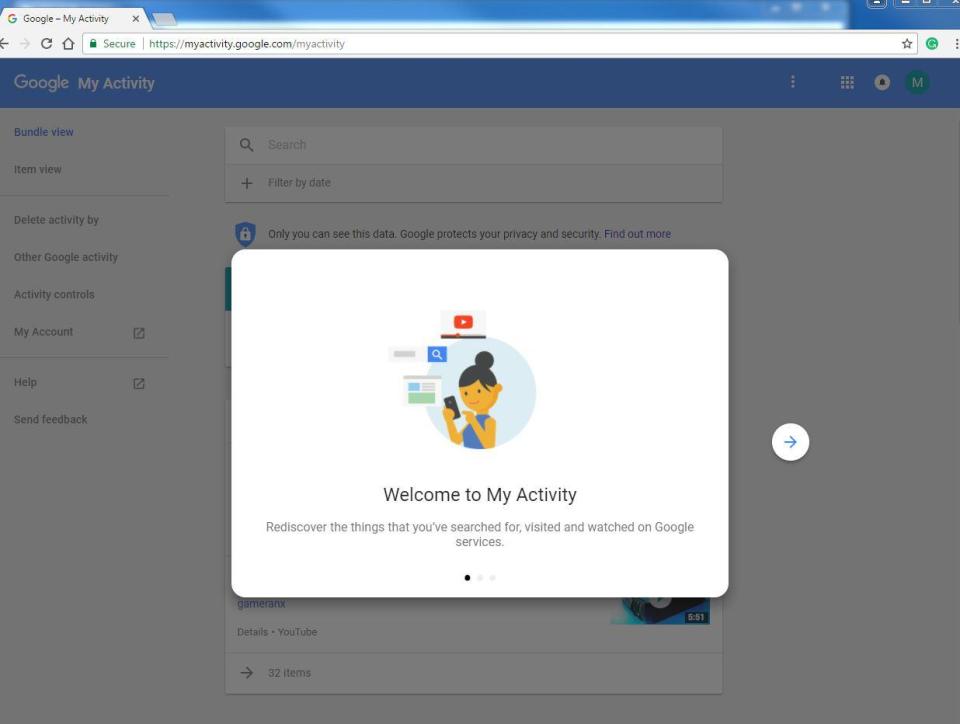 Visit history.google.com/history to find a hub that is pretty much a tell-all about your digital life

You can check for your web activity by clicking here 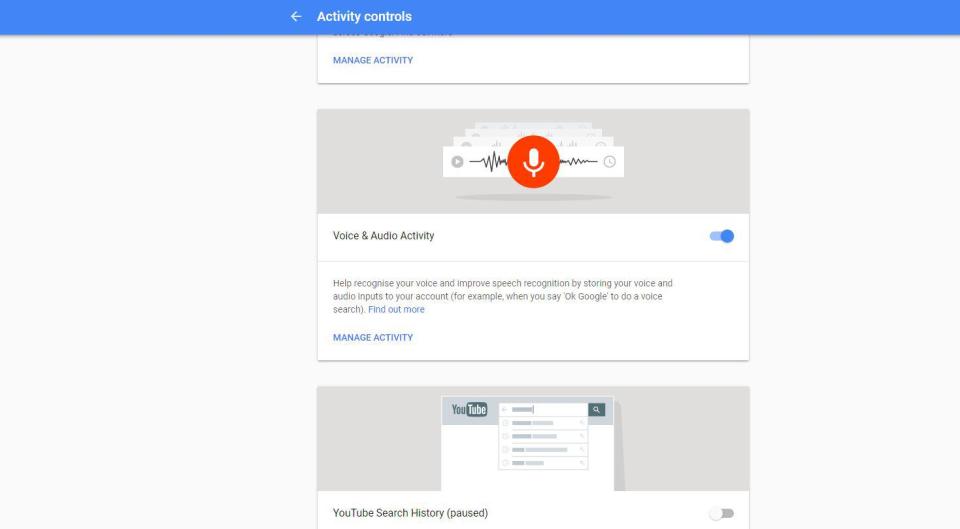 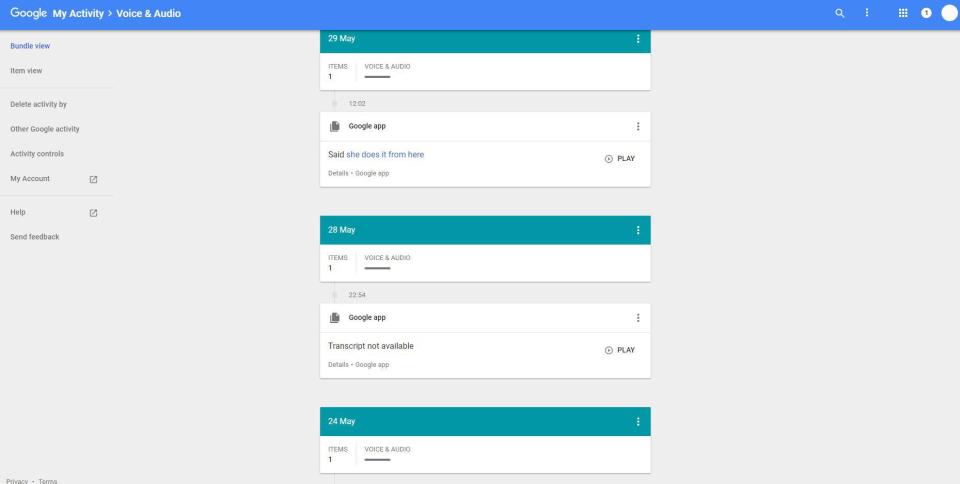 You should see a list of all the audio files here

Under the tab Voice and Audio Activity, you’ll find a list of recordings in chronological order.

Before you start listening, you might want to plug your headphones in.

You’ll have to listen to the cringe-worthy sounds of you buying a pack of fags in the newsagent or making small talk at the bus stop.

But there might also be all lots of salacious gossip that you wouldn’t want anybody else to hear.

You’ll be shocked to hear what it’s picked up, however.

The Sun Online discovered recordings from when the phone’s owner was not in the room – and even revealed a romantic interlude between two mystery colleagues.

How do I switch it off?

It is possible to stop Google from storing so much info in the future.

Go back to “Activity controls” and under “Web & App activity” you should see a blue toggle.

You can switch this off, but be warned. Officially you have merely “paused” the recordings – so keep checking back on a regular basis to ensure that the terms and conditions don’t change in the future and you aren’t auto-enrolled when a new Android update comes along.

The tech giant also stores your voice recordings to improve its Siri assistant – but you aren’t able to access them.

Apple says that the recordings are anonymised after 18 months, so nobody would be able to figure out who is speaking.

But what happens when Governments such as the Chinese Communist Party start using their influence to restrict the Freedom of Expression of members of another country?

The actual number of addicted people per capita is the same today in the U.S., Canada and the UK as it was in 1920.
#opioidcrisis
#opioid

"Hey they treat adults like this also.I have been on morphine therapy since 2002, for chronic…" — DJ Colonel Corn http://disq.us/p/2ew9ao7